Lyra is a series of portable media players developed and sold by RCA. 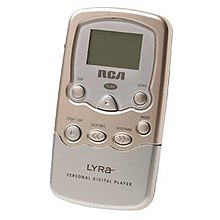 The 2201 is one of, if not the oldest Lyra made by RCA/Thomson. Originally sold with a 32MB CF card, it has a 1" × 3/4" backlit monochrome display, software five band graphic equalizer, and an external power jack. This series of players requires a proprietary CF reader used in conjunction with specific media players in Windows in order to write files to the card. A supported setup would take a blank CF card, recognize the correct reader attached to the PC, and then while syncing songs to the device, convert them to an encrypted version of RealAudio, MP3, MP3Pro, and later WMA format that is unrecognizable to any other device. It also drops a folder title 'Pmp' onto the root level of the device, which contains the boot image, a config file, and one or more executable, wma.exe, mp3.exe, or rlm.exe. modified versions of the wma.exe program, capable of playing unencrypted WMA files. This can be used in conjunction with a non-certified CF reader, making the device usable again to anyone who lost theirs and cannot acquire a new one. The only requirement then is to convert your MP3 files to WMA using any number of free converters.

The device also supports much larger CF cards than it original shipped with, up to at least 512MB. At these sizes though, boot time becomes significantly long, as the Lyra scans the entire card before presenting you with any menu. With only 250MB of files, spread across roughly 100 tracks, this can be over a minute.

The 2201 also supports custom splash screens via third party software. The RCA logo can be replaced by overwriting the screen.bit file in the Pmp folder. See How To Create Lyra Screen BIT Designs for more information.

An updated version, the RD2204A, was sold with a 64MB Compact Flash card. This version supports Compact flash cards up to at least 2GB. Like the RD2201A, boot times increase with the size of the card. The RD2204A can also be used with a third party CF reader, provided that the user installs the RCA software on the PC.

The most popular of the Lyra series was the Lyra PDP-2860, which was also one of the first portable media players capable of playing MPEG-4 encoded videos. The PDP-2860 is remarkably similar to the Lyra RD2780. The device was manufactured having a hard drive with a maximum capacity of 20GB but could also work with a 60GB hard drive which had to be installed manually. Battery life was reported to last for up to 3 hours of video and 6 hours of audio playback.

One of the more popular features of this digital audio player was its ability to record live television through the RCA ports on your television set. The player's LCD display had a resolution of 320×240 pixels with 16 million colors. It was also possible to view photos on the display screen while audio was playing.

The PDP-2860 was also UMS-capable, meaning that it could act as a portable external harddrive with no additional software or driver installation.

The Lyra x2400 is a portable audio/video recorder and player with a 3.5" LCD screen. It has a CompactFlash slot, audio out, built-in speaker and RCA A/V inputs. Recorded video is compressed with an XVID encoder. The included software, Blaze Media Encoder, can transcode from most popular video and audio formats.

The Lyra x3030 features a 30 GB hard drive with support for many audio and video formats. Included is a DIVX encoder which can translate most video formats into smaller more efficient formats.

There is no provision to randomly play video clips, as the user may wish to do for a music video jukebox.

The DiVX converter gives its output file with the .divx extension, which the Lyra rejects as incompatible. However, all the user has to do is rename the file with a .avi extension to make it work.

The first documentation to be shipped spoke of a system tray resident icon and program to manage the device. No such software exists in the distribution, and they have since revised their documentation to remove all mention of it.

Pros: Very cheap. Fast auto-recognition in Win 7 and no software to install. I prefer to just drag and drop files to my mp3s players, and this one works fine for that. Includes some "EasyRip" software on the device, which I do not intend to try. Comes with a pair of earbuds (albeit they are nothing special and you will most likely replace them with your own set). Runs on one AAA battery. This is a pro for me (more portable in my case), but others might prefer charging via USB. Plays audio book .aa files (not listed in Details, nice surprise). Display is nice and big for a player this small. Radio tuner reception is surprisingly good; every local station I can think of comes in (but who listens to radio these days?).

Cons: Voice Memo records in wav file format (I would have preferred mp3 format). Details state that this player does video recording. This is completely false. It doesn't even play video, why would it be able to record it? The carrying clip attachment that comes with it is a nice thought, but it covers the mic. Menu system is a bit clunky, but this is usually the case with small, cheap players like this. No worse than others I've seen.

Overall Review: Bought this player because it was the cheapest listed that does voice recording (I needed that feature for recording class lectures).

How to Troubleshoot RCA MP3 Players

Attempt to turn your RCA MP3 player on and off. If the device does not turn itself on when the "Power" or "Play" buttons are pushed, you may need to recharge or replace the batteries.

Decrease the volume on your MP3 player and set the equalizer to "Flat" or "None" if the sound from your device is distorted. Distorted sound is usually the result of an audio track being played at too high of a volume. If the audio track is still distorted after decreasing the volume, the file may be corrupt. Delete the track from the MP3 player and reload it from your computer.

Delete tracks from your MP3 player if you receive an error telling you that the device is full. Your RCA MP3 player has a limited capacity and you need to clear space by removing old files before you can add new files.

William Nagel is a graduate of the Georgia Institute of Technology, where he studied science, technology and culture. He has been writing since 2007 and specializes in computer hardware, operating systems and software documentation. His work has been published in the "North Avenue Review."

How to Reformat an RCA Opal MP3 Player

Your RCA Opal MP3 Player is handy for listening to business audiobooks, music and recorded notes while at work or play. The device usually works fine but problems can occur over time, including freezing during music playback or unexpected shutoffs. Reformatting your RCA Opal MP3 Player’s hard drive can solve the problems. The formatting process erases all content and returns the device back to its original factory state. Once the process is started, you can’t stop or reverse it.

Connect your RCA Opal MP3 Player to your computer with the supplied USB cable. Your computer recognizes the device and opens a Windows Explorer window.

Right-click the player’s icon and click “Format.” Click the check box next to “Quick Format” to remove the check mark – you want to perform a full format and not a Quick Format.

Click the “Start” button to start the reformatting process. Windows' Format utility prompts you when the process is complete.

Leave your RCA Opal MP3 Player connected and click Start, then “All Programs” and “Windows Media Player” or “RCA easyRip” to transfer audio files to the device.

Nick Davis is a freelance writer specializing in technical, travel and entertainment articles. He holds a bachelor's degree in journalism from the University of Memphis and an associate degree in computer information systems from the State Technical Institute at Memphis. His work has appeared in "Elite Memphis" and "The Daily Helmsman" in Memphis, Tenn. He is currently living in Albuquerque, N.M.

Battery Charge Life: Up to 10 Hours

Warranty: 1 Year Limited Warranty. To obtain a copy of the manufacturer's or supplier's warranty for this item prior to purchasing the item, please call Target Guest Services at 1-800-591-3869

Origin: Made in the USA or Imported

This mp3 Player combines smarts with flexibility. Its sleek thumbdrive-style design makes this model simple and functional. It has 4GB memory which holds up to 1200 songs and comes with earbud headphones so you can instantly start listening right out of the box. The built-in rechargeable battery and removable sport clip are perfect for an active lifestyle. The integrated USB design also makes transferring files quick and easy. Included software makes it simpler than ever to manage your music.

I asked - Why tell, Vetal smiled, I'll show those vidosik now. Seryoga took it off on the DVR and already threw it off for me. Vetalik handed me the phone. The camera captured almost the entire kitchen; the recorder was most likely put on the refrigerator upon leaving.

I'm a dumb, lazy old whore. I can only eat, shit, sleep and fuck. I'm a lustful old thing. You can only fuck and screw me up like a stupid cow.

How to make a bedwars shop