For the 2021 Fall Trap League, 32 high school teams are assigned to 5 conferences based on team size.

For the 2021 Fall Skeet League, 2 high school teams are assigned to 1 conference

For the 2021 Fall Sporting Clays League, 1 Michigan high school teams were assigned to the National Conferencescreated for states that had limited teams.

Courtesy photo From left: Lauren Smith, Jenna Smith and Abby Walwro all finished in the top 10 in the state for Central Cambria’s trap shooting team.

Smith has been a deer hunter for many years, and her father, Mike, is the coach of the Central Cambria girls trap shooting team, which recently completed its third season.

Lauren Smith — Jenna’s younger sister and Mike’s younger daughter — is also a member of the team, which competed in the 2021 Pennsylvania High School Clay Target League State Championships on Saturday, June 26, at the Pennsylvania State Shotgunning Association facility in the Northumberland County town of Elysburg.

Jenna Smith won the girls varsity division state championship that day, taking first place among a field of over 60 girls competitors by shooting and breaking a total of 96 clay pigeons out of 100 chances.

“I’m really excited about it,” Jenna Smith said of her state championship. “It was super unexpected for me. I hadn’t really shot well this year, so I didn’t really know what was going to happen at states. I was super happy to come out on top.”

Maintaining her composure throughout the event was a big factor for Jenna Smith.

“I stayed calm and focused the whole time,” said Jenna, who will be attending the University of Pittsburgh at Johnstown this fall and pursuing a biology degree with the goal of eventually becoming an athletic trainer. “I wasn’t thinking about how I had shot previously this year, or about how my competition at states was shooting. I was just trying to do the best that I could, focusing on one bird at a time.”

Jenna Smith, Pavlik and Walwro all earned state medals for finishing among the top three shooters.

Mike Smith was pleased with the efforts of his top 10 shooters.

“This is only our third year as a team, and for Central Cambria to have three girls finish among the top 10 in the state, that’s pretty good stuff, good for the school,” Mike Smith said.

The day was highlighted by Jenna’s state championship.

“That’s fantastic,” Mike Smith said. “Obviously, I’m jaded because she’s my daughter, but she has really worked hard. She had a rough start to the year, she wasn’t shooting too well early in the regular season. But boy, she has really kicked into high gear in the last month or so, and she peaked at the right time.”

Shotguns are used in trap shooting to break clay birds that are released electronically from a machine about 16 yards away from the shooter. The clays are released at different angles in the air, and are traveling at a speed of over 40 miles per hour. Since the shooter has no initial idea of where the clay will be released, good hand-eye coordination is essential.

“You have to get your eyes on the target as fast as you can,” Mike Smith said.

Walwro, like Jenna and Lauren Smith, has also grown up around trap shooting. Walwro’s grandfather, father and brother have all participated in the sport.

“I’ve been shooting guns since I was a young girl, when I shot a BB gun,” Walwro said. “Shooting kind of comes naturally to me, and going out to the state meet, I was just telling myself to have fun, relax, and stay with the basics. I knew that if I did that, I would perform well, but I didn’t think it would be this well.”

Mike Smith said that trap shooting — which is a non-PIAA affiliated sport — is one of the fastest growing high school sports in the state of Pennsylvania, as well as across the nation. There are a total of 32 boys and girls high school teams across Pennsylvania, with teams participating in conferences according to roster size.

Central Cambria won its eight-team conference championship this year. The regular season begins in early April and ends in late May, and meets are held virtually and scores are submitted online to the state organization for posting.

“We had 28 kids out for the team this year, and for the first time this year, we had enough kids to enter the state championship event,” Mike Smith said.

Today's breaking news and more in your inbox

Buffer Creek can now seat over 200 people between two pavilions and indoor facilities. This allows plenty of under-roof seating for corporate and fundraising events.

Buffer Creek is proud to have hosted the 2013 Pennsylvania State Sporting Clays Championship. The number of registered targets shot at this event makes it the largest state championship to date.

For all shoot registration and results:
www.winscoreonline.com

Due to limited ammunition supply, please bring your own ammunition or call ahead for availability. 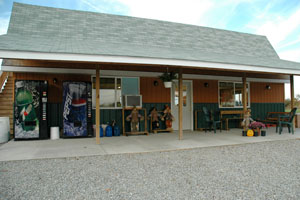 The 2021 Spring Season is here! Thank you coaches, schools, parents and gun clubs for helping introduce more students to shooting sports! For the 2021 Spring Trap League, 32 high school teams are assigned to 6 conferences based on team size. (#) = Number of athlete’s scores used for each team to determine True Team™ […]

Congratulations to all teams and individuals on their 2020 Fall League accomplishments! Awards will be mailed beginning 12/1. Please allow 2-3 weeks for delivery. Thank you coaches, schools, parents and gun clubs for helping introduce more students to shootings sports! Trap Shooting View the weekly standings HERE For the 2020 Fall Trap League, 13 high […]

A Special Thank You

This spring, COVID-19 challenged League athletes, teams, and families across the nation. In order to provide the most opportunity for League athletes to participate, the League’s board of directors approved a package of modifications to our regular season operations. These changes included an extended registration period and a longer extended season that necessitated the cancellation […]

In the last decade, the USA Clay Target League has grown from 30 students athletes on three teams in Minnesota to more than 32,000 registered athletes across over 1,000 teams nationwide last in 2019. Unfortunately, as a result of COVID-19, the League faced unprecedented challenges. This spring saw 80% of schools and more than 28,000 […]

The USA High School Clay Target League is excited to announce that the clay target disciplines of ‘Sporting Clays’ and ‘5-Stand’ have been added to their highly popular high school clay target shooting programs, in which over 30,000 student athletes participate. The inclusion of sporting clays and 5-stand will provide exciting new clay target shooting […]

Congratulations to all teams and individuals on their 2019 Fall League accomplishments! Awards will be mailed to the team shipping address listed in TMS. Please allow 2-3 weeks for delivery. Thank you coaches, schools, parents and gun clubs for helping introduce more students to shootings sports!  Trap

More than 25 high school teams featuring over 600 student athletes, along with over a thousand spectators, are expected to attend the 2022 PASHSCTL Clay Target Shooting State Tournament on TBD, at the Pennsylvania State Shotgunning Association in Elysburg, PA.

Everyone is invited to participate!

The State Tournament is the only event during the year that all League participants are invited to attend and compete at the same venue! Individuals will compete within their assigned shooting skill classification based on their year-end season average. Teams will use their top five members’ scores from any classification for their team score. Schedules for shooting times and field assignments will be published about a week before the State Tournament.

Sours: http://pa.traptournament.com/
Clay Shooting at Bisley - Behind the Scenes of the Traps!

The USA Clay Target League is a 501(c)(3) non-profit organization. The League is the independent provider of clay target shooting sports for secondary and postsecondary schools. The League’s priority are safety, fun, and marksmanship – in that order.

Clay target shooting has over the last decade grown from a handful of schools in Minnesota to more than 1,000 across the country, including 39 schools in Pennsylvania.

14 CMHS students registered to participate in the 2021 spring season. Students could register to shoot in one, two or all three disciplines which include skeet, five-stand and trap. One other student also joined the club to volunteer as an assistant, helping to set up, pull targets and score. The roster this year was open to any male or female student in grades 9 through 12 at Central Mountain. The school had one girl (Kara Stover) shooting on the team. Around 18% of participants in the U.S. high school league are female, up from 4% five years ago.

The kids shoot two registered rounds of 25 shots each week during the five-week competition season. Scores are placed into a computer database which in a typical season updates every Sunday. Teams and individuals can see where they are ranked.

Each discipline has two or more coaches who specialize in a particular discipline. Their wealth of knowledge has really helped the kids to improve their skills. Coaches for the skeet team are Tom Hillard, Lenny Young, Steve Phoenix and Renee Hillard. Coaches for the trap team are John Lavrich, Lester Ott and Gary Proctor. Coaches for the five-stand team are Rob Tourney, Steve Heverly, Ruth Gundlach and Gib Moyer. The team’s range safety officers are Lenny Unger and Mike Koons.

Today's breaking news and more in your inbox

Football has long operated with the premise that the coaches and the quarterbacks get too much credit and too much ...

Playing on the road for the second consecutive day, the Lock Haven University tennis team turned in back-to-back ...

Penn State lost its first game of the season Saturday at Iowa, falling 23-20, in the process also lost starting ...

Lock Haven University football is heading back to the drawing board after dropping a home game, 75-21, to ...

WINGATE - From the very first kick off the Bald Eagle Area football team had all facets running on full charge as ...

MILL HALL – Shanon Manning gathered his team near midfield after Friday night’s game against Selinsgrove. The ...

My aching back meme