Hey gang, just a reminder that tuning your carb every now and then can save you some headaches down the road (literally). I was driving during the coldest of weather here (in the teens at times) and thankfully the roads were dry. I noticed that as it got warmer over the past few days my scoot was getting harder to start and stay running at idle. At first I thought the battery might be weak (and this may have been so) but the idling rough, some backfiring and stalling at stops indicated a need to retune the old girl. So, I opened up the bucket, turned up the idle screw (after a warm-up run of 15 min) and reset the A/F screw. I was sort of surprised how lean it was running according to how many turns I needed, about 3 3/4 to get her to highest RPM anything after that and it went to the rich side so I set it up right and now she's back to full song. A little proactive maintenance is always a good thing.

What the carburetor does is regulate the amount of fuel and air which are supplied to the engine. To go faster you need more fuel and more air and they must be in the right proportion. The fuel also has to be atomized as much as possible (i.e. be supplied in tiny droplets). The carburetor controls all these functions and generally does it quite well.

The type of carburetor used on most 150cc GY6 type engines is a Keihin style CV carburetor with a 24mm throat. Keihin design carburetors are a well tried and tested design developed in Japan (Keihin is a region near Tokyo).

Without removing and disassembling the carburetor, there are only two adjustments you can make, but these should take care of most minor problems. The first is the adjustment of the idle speed. 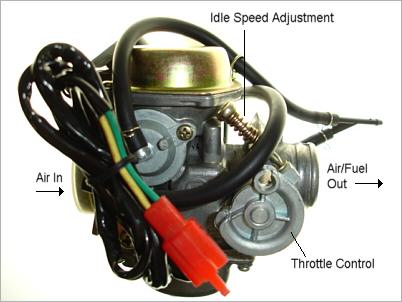 Above is a picture of a typical GY6 engine carburetor and the view is that from the right side of most engine configurations on 150cc Chinese scooters. There's a small spring loaded screw which adjusts the idle speed. It's right next to the throttle control which is connected to the twist grip on the right handlebar. On most 150cc scooters, idle speed should be around 1500rpm when the engine is fully warmed up. Don't make adjustments when the engine is cold. Take a 5 or 10 minute ride first. When the engine is cold the automatic choke is in operation and that can change the idle speed. If you have a tachometer, setting the speed is easy. If you don't, you want to set the speed to a low idle. Fast enough so that the engine doesn't stumble or stall, but slow enough that the clutch doesn't engage and try to move the scooter forward. On most scooters from 50cc to 250cc, this will be somewhere in the 1500-2000rpm region.

The other adjustment you can make is to the low speed fuel/air ("mixture") ratio. This is done on most scooters using a screw adjustment on the other side of the carburetor as shown below. 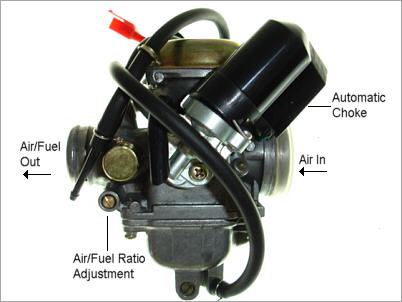 If the scooter idles well and runs fine at low speed, but has problems at high speed, the problem may lie inside the carburetor with the main jet. The fuel/air ratio at higher speeds is set by the jets inside the carburetor and to get at them the carburetor has be be removed and disassembled. This can be a tricky job as the parts are small and delicate. The good news is that these carburetors are quite cheap. You can get a new one for $50-$60, so if you can't make your scooter run smoothly and you don't like the idea of taking the carburetor apart, you can always replace it!

Powersports Outlet (aka Encore Performance and Fabrication) is a motorcycle, scooter, and ATV dealer located in the high desert of Prescott, AZ

We carry a large selection of parts and accessories and provide all levels of service on the brands we sell. We started as a single line Moto Guzzi dealer in 1995. We have since branched out and now carry Moto Guzzi, Royal Enfield, Kymco, Hyosung, Genuine and SYM.

We are located on White Spar Rdjust South of historic Downtown Prescott.

If I were a neat girl, I would no doubt find him there. And so I had to shake out all the contents on the floor. A kind of barricade had formed on the floor, from which, like the halberd of the last defender of a besieged city, an aspen stake.

On this day, Siley Malin was happier than ever. What she had dreamed of for a whole year has come true. Ever since the day Siley won her college beauty pageant a year ago. Then the victory in several more qualifying competitions and now the coveted victory in the final city competition. Now Siley Malin is in front of her Miss Beauty of the city of.

Mom was very proud of my hairstyle, it also interfered with me sometimes, especially in the pool. Usually I had a ponytail and bangs licked up with mom's gel. But if I put my bangs on my forehead, and really became like a young Kr the truth Orbakaite. That year, her video was just released on the screens, Let's talk about this, about this, (google, let's talk, 1993 and you can.

Imagine me by 95) and I often heard about the similarity, just not such long hair as her.

Wife dressed in a sexy suit, stockings, put on makeup and put on heels, left our room and flew to the next room and asked to let them stay alone for 2 hours. I went to the nearest massage parlor and instead of a massage I took a local diva in the ass. Returning to the hotel, I knocked on the room but the door was not opened, I decided to jump over the partition on the balcony and.

Enter from the other side. Going into the room, I realized that they were in the bathroom when they went in and saw that Andrei was standing.