The Chevrolet Cruze is a global car, designed by an international engineering team and sold in 115 countries. Stylish and roomy, the Cruze was a big step up from the previous GM budget compacts, the Cavalierand the Cobalt. 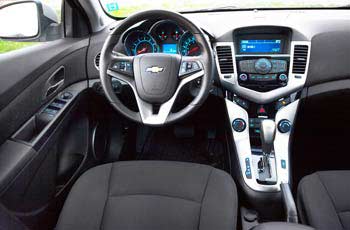 2012 Chevrolet Cruze.
Compared to many other compact cars, the Cruze is heavier and offers a more solid feel. It's also one of the safest compact cars. That's good, but is it reliable? What are the common problems?

Chevrolet Cruze problems:The 2011 and 2011 Chevrolet Cruze drew more complaints than other model years, most about the engine and transmission issues. Here are a few examples:
A faulty PCV diaphragm inside the valve cover and missing air check valve in the intake manifold can cause various problems with the engine, including excessive oil consumption, blue smoke from the exhaust, rough idle and Check Engine light. The computer scan may reveal codes P0171, P0106, P1101 and others. The repair might involve replacing the valve cover and/or the intake manifold. The dealer may charge you up to $900 to replace the intake manifold, valve cover and related parts. Google 'Service Bulletin PIP5197J' for more info. The bulletin is dated October 2018. This forumalso has some info.
The PCV pipe can go bad too, causing similar issues and the code P1101. A leaking water pump can cause the engine to overheat and the A/C to stop working in the 1.4L engine. According to the GM service bulletin 14371A dated January 2015 for the 2011-2014 Chevrolet Cruze with the 1.4L engine, the warranty coverage for this issue has been extended to 10 years or 150,000 miles (240,000 km), whichever occurs first. The bulletin advises replacing a water pump if it's leaking. If out of warranty, the water pump replacement may cost from $480 to $620.

Oil leaks from the valve cover and engine and transmission seals and cooler lines are common. 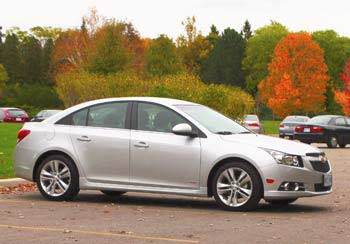 2012 Chevrolet Cruze.
Coolant leaks are mentioned often too. Common sources of coolant leaks include cracks in the coolant expansion tank, coolant outlet valve/housing, thermostat housing and the radiator. The radiator replacement is costly, other mentioned parts are not very expensive. Coolant leaks must be fixed as soon as possible to prevent overheating of the engine. Watch these Youtube videosfor more info.

The trunk release switch in the trunk can stop working. The repair is not very expensive: replace the switch.

According to GM service bulletin 14311B for the 2011-2015 Chevrolet Cruze, many electrical problems can be caused by a loose negative battery cable. Problems include the display turning off and on, Antilock Brake System, Service Traction System, Service and Steering vehicle messages, etc. The bulletin extends the coverage for this problem. Dealers will replace the negative battery cable.

Reliability:As of September 2021, Consumer Reports rates the 2011-2015 Cruze as 'worse than average' for reliability. Some of the problems were addressed by warranty campaigns and recalls. The Cruze 1.8L engine is less troublesome than the 1.4L turbo. More reliable compact cars include Toyota Prius, Corolla, Mazda 3, and Honda Civic.

Engine and Transmission:The base LS model comes with a 138-hp 1.8L engine while the LT, 2LT, ECO and LTZ offer a turbocharged 1.4L motor.

Gauges.
For the 2014 and 2015 model years, the 151-hp turbodiesel was added to the 2.0TD and DIESEL trims. A 6-speed manual transmission is available in LS, LT and ECO trims. The most common model in the U.S. is the 1.4-turbo LT with a 6-speed automatic transmission.
Read also: Pros and cons of buying a car with a Turbocharger.

Timing belt or Timing chain:The Diesel and 1.8L engine have a timing belt. According to the 2015 owner's manual, for the 1.8L and 2.0L diesel engines, the timing belt, along with the idler pulley and timing belt tensioner (plus the water pump in the diesel engine) must be replaced at 97,500 miles or 156,000 km. Read more: Timing belt: problems, tensioner, what happens if it breaks, when to replace. The 1.4L turbo engine has a timing chain that requires no maintenance during the life of the engine, according to GM.

Handling and ride:The Cruze offers a solid quiet ride and responsive handling. The 1.8L engine is peppy and quick off the line. The 1.4L turbo is surprisingly smooth.

Cons:Seat fabric could be better, below average reliability, the cruise control is not standard.

Overall:The Cruze is one of the safest compact cars, and it offers a comfortable, quiet ride. The NHTSA awarded all model years of the first-generation 2011-2015 Chevy Cruze with a 5-star overall crash test rating. The reliability is not very good, although we came across many owner reviews that were happy with their Cruze.

What to look for when buying a used Chevrolet Cruze:The Cruze was popular with rental car companies; check the history records to see if the car was used as a rental vehicle. Many owners mentioned coolant, oil and transmission leaks, so we would suggest having the vehicle of your choice inspected for leaks and other problems. One of the symptoms of coolant leaks is low coolant level in the coolant bottle, and a coolant smell under the hood. During the test drive, watch out for the coolant temperature gauge showing signs of overheating. Overheating the engine can cause many problems. Issues with the thermostat and PCV system are often mentioned as the reason for the Check Engine light coming on. The white smoke from the exhaust, lack of boost and whining noise coming from the front of the engine, could indicate a problem with a turbocharger. Read also: What mileage is OK for a used car?

Maintenance tips:The turbocharged engine is very sensitive to lack of maintenance; have the oil changed regularly. According to the 2013 Cruze owner's manual, the recommended oil grade is SAE 5W-30, Synthetic Blend.
Coolant leaks are mentioned often; keep an eye on the coolant level and watch out for a coolant smell from under the hood and signs of overheating.
Old spark plugs can cause the engine to misfire and the Check Engine light to come on. Have the spark plugs replaced at or before the recommended intervals. The owner's manual for the 2015 Cruze recommends replacing spark plugs in the 1.4L engine at 60K miles for severe conditions and 97K miles for normal conditions. Read more: How to maintain the engine.

Read also:
Why "Check Engine" light comes on?
Serpentine belt: When to replace

We're offline for a tune-up, we'll be up and running smoothly very soon.

In the meantime, here are some other options available:

View us on Social Media
Facebook/Twitter/Blog

We appreciate your patience – on your next visit, use coupon code PS20 for 20% off your purchase.

We look forward to serving you,
The Advance Team

I watched as plump lips swallowing a member cover it with warmth and bliss. how beautifully she sat down and froze. Then she bent down and kissed again.

Well Vit, well, please, we didnt go on a hike. she turned on the mode of a kind and sweet girl. Well, if you don't like it, we won't go anymore.

Again, I could hardly restrain myself so as not to scream. Before her husband returned from watch, a friend came two more times. After my husband's arrival, life went on as usual: monotonous, monotonous days, similar to each other, like twins. Cold, joyless sex and secret memories. Sometimes my husband went fishing.

How to factory reset iview tablet