This is the single most important quest a Mage needs to do at Level 60, as it rewards the most powerful conjure water spell in the game:

Fortunately, it is also one of the shortest and easiest quests to do in WoW Classic. Simply enter Dire Maul North, talk to Lorekeeper Lydros who is inside the big door entrance located in the bottom level, which you can reach by going straight from the entrance. He will give you the Arcane Refreshment quest.

This quest requires you to go to Dire Maul East and kill Hydrospawn, in order to loot

Hydrospawn Essence, which you can then turn in at Lorekeeper Lydros in order to receive

Conjure Water. This is a really powerful type of water, and you will often be able to find people willing to tip you for a lot of stacks of it for their farming activities!

This quest rewards strong wands for the level at which you can first complete it:

Ragefire Wand. It begins at level 30, when your class trainer gives you the Journey to the Marsh quest, leading you to Tabetha in Dustwallow Marsh, around the 43,57 map coordinates.

Tabetha will set you on the Hidden Secrets quest, which requires you to go to The Shimmering Flats in Thousand Needles and talk to Magus Tirth, around the 77,76 coordinates. Grab Get the Scoop from Magus, and search for a chicken named Plucky Johnson nearby. Use the /beckon emote on him to transform him back into Magus' assistant, allowing you to complete the quest and receive the next step, Rituals of Power.

This step requires you to go grab the

Rituals of Power item from the Scarlet Monastery's Library wing, which you can find in a bookshelf to your left, just as you enter the Athenaeum section of the dungeon. With the book in your inventory, return to Tabetha and start the Items of Power quest, which requires you to get a

Bolt Charged Bramble. Get the Jade from Mining or the auction house, and 10

Witherbark Totem Sticks from killing Witherbark Trolls in Arathi Highlands, around the 65,65 coordinates. These are used at the Circle of Outer Binding, around 51,48, to create the Bolt Charged Bramble. Finally, return to Tabetha to receive

There are a lot of other Mage quests, but they mostly have sub-par rewards that you will quickly replace with higher level quest gear or dungeon gear.

Still, for completion's sake, you can get

Celestial Stave from the questline started with Return to the Marsh, picked up from your class trainer at Level 35 or higher.

This quest line will take you through The Infernal Orb, The Exorcism, Power in Uldaman (which requires the completion of the Uldaman dungeon) and Mana Surges, culminating in Celestial Power which will allow you to pick one of the aforementioned rewards.

There are also a few, zone specific Level 10 quests, such as Ju-Ju Heaps for Trolls in Durotar, and other miscellaneous quests with generally crappy rewards.

By completing this questline, which you can start from your trainer at Level 50, you can obtain

Fire Ruby, an unique trinket which regenerates some Mana on use and increases your next Fire damage's spell by up to 100, acting as extra Spell Damage.

While not an impressive trinket by any means, its effect can allow you to burst harder with

Presence of Mind and

Pyroblast, and as such it is a somewhat irreplaceable item for any Mage wishing to do that at some point.

The other good option is the neck,

Arcane Crystal Pendant, which is easily replaced once you start raiding or when you obtain some of the pre-bis items, but which is a strong option for the Level you can get it at.

For the questline, start by picking up Magecraft from a major city Mage trainer, which leads into Magic Dust in Azshara (make sure to use the teleporter in order to reach the quest giver).

Kill and loot Blood Elf NPCs around 57, 28 in Azshara to complete it, and get its follow-up, The Siren's Coral, which is also completed nearby by killing and looting Naga NPCs around the 44,54 ruins.

The final step is Destroy Morphaz, which will lead you into Sunken Temple and require you to kill and loot Morphaz, one of the mini-boss green drakes patrolling in the innermost area.

If you are trying to figure out where to learn Conjure water Rank 7, this is the place!

The goal of this operation is to be able to create Conjured Crystal Water!
This guide is my attempt at walking you through the process as easily as possible.

Note: An Invisibility potion is required!

Thankfully, this quest only involves 2 of the 3 sections(East and North).
The quest giver is in DM North and the Quest Item is located in DM East.

You will either need the Crescent Key from DM East or a rogue with max lock picking to enter DM North.

Getting to the instances

If you are still lost I recommend This Video.

To get the Crescent Key you will have to chase an imp through the East wing of Dire Maul.

Upon entering you will see a friendly imp to your left. Talk to him and he will run away. Follow him through the instance, you will have to talk to and follow him multiple times. Eventually he will go up some stairs and when you talk to him this time he will summon imps and attack you. Focus him and kill the non-elite adds later. He will drop the Crescent Key. Now lets go to Dire Maul North to pick up your quest! 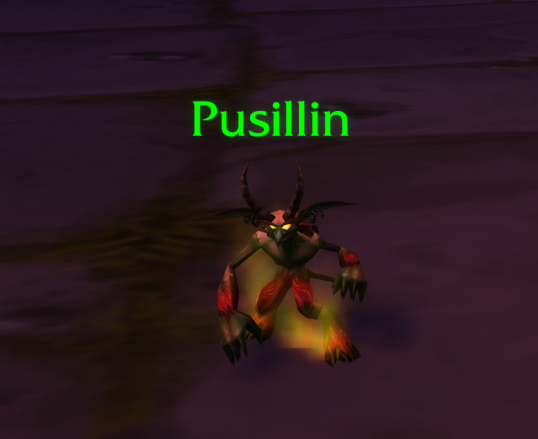 Let’s go get that quest!

Technically this can be done alone with any type of invisibility.

Once you enter DM North there are 3 ogres to your left and one wandering directly in front of you. If you see the 3 ogres you should also see the ramp down beside them.

Wait for the pat to move and then head down the ramp. Next you jump off the left side of the ramp and avoid the second group of ogres now head down the second ramp. Walk down this hallway until you find a door that requires the crescent key. Once you open the door with the Crescent Key you will be in the library. The quest giver Lorekeeper Lydros will be straight ahead.

Back to Dire Maul East! As soon as you zone in, hug the right wall and head through the second corridor. Take the first right into a hall filled with Satyr demons and plants.

Hug the left wall, killing what you have to, then take the left turn below the ramp. Kill the enemies you encounter along the left wall again and you will end up in a pool with Hydrospawn in it. He spawns water elementals but they despawn when he dies.

Once you have the Hydrospawn make your way back to the quest giver in DM North and you are done!

This is the default welcome page used to test the correct operation of the Apache2 server after installation on Ubuntu systems. It is based on the equivalent page on Debian, from which the Ubuntu Apache packaging is derived. If you can read this page, it means that the Apache HTTP server installed at this site is working properly. You should replace this file (located at ) before continuing to operate your HTTP server.

If you are a normal user of this web site and don't know what this page is about, this probably means that the site is currently unavailable due to maintenance. If the problem persists, please contact the site's administrator.

Ubuntu's Apache2 default configuration is different from the upstream default configuration, and split into several files optimized for interaction with Ubuntu tools. The configuration system is fully documented in /usr/share/doc/apache2/README.Debian.gz. Refer to this for the full documentation. Documentation for the web server itself can be found by accessing the manual if the package was installed on this server.

The configuration layout for an Apache2 web server installation on Ubuntu systems is as follows:

By default, Ubuntu does not allow access through the web browser to any file apart of those located in , public_html directories (when enabled) and (for web applications). If your site is using a web document root located elsewhere (such as in ) you may need to whitelist your document root directory in .

The default Ubuntu document root is . You can make your own virtual hosts under /var/www. This is different to previous releases which provides better security out of the box.

Please use the tool to report bugs in the Apache2 package with Ubuntu. However, check existing bug reports before reporting a new bug.

Please report bugs specific to modules (such as PHP and others) to respective packages, not to the web server itself.

After some time, the owner of the apartment brought a new washing machine. Having printed and installed it, Gevorg said seriously. -Here is my next request, now you will wash, especially since now it will not be a problem.

What would she tell me if she saw this. The only excuse for the madness that happened can only be that I did not want to cheat on her even after her death, but I could no longer. Do without sex.

And so Ira went to the edge of the pool, grabbed the edge of the pool with her hands, and slowly began to bring. Her face closer to the voluptuous bud. I could not resist and tilted her head, it turned out so hard that she buried deeply in her charms. And then the licking began. Natakha moaned sweetly, and began to wave her, then took her head with her hands and began to carry it all over the crotch.

First of all, she stripped naked, remained in one dog collar, put all the rags in a drawer. She ran into the bathroom, where she thoroughly washed and washed herself, then she wiped herself dry and smeared the vagina. Anus and, inserting a finger into it, anus with lubricating cream. The old woman put on a short robe and, wrapping it up, tied herself tight with a long thick belt with large, tight knots at the ends.

Is sasuke a villain