The Mercedes-Benz CLK-Class is a former series of mid-size or entry-level luxurycoupés and convertibles produced by Mercedes-Benz between 1997 and 2010. Although its design and styling was derived from the E-Class, the mechanical underpinnings were based on the smaller C-Class, and was positioned between the Mercedes-Benz SLK-Class and CL-Class. It primarily competes with the BMW 3 Series Coupé and Audi A4 Cabriolet.

In 2010, Mercedes moved the CLK-Class designation back to the E-Class, as it had been called previously.[1]

The CLK introduced a new market niche for Mercedes-Benz. Although the W208 used components from the E-Class (W210), aesthetic based on the E-Class and had a specification level higher than the E-Class, it was in fact based on the less expensive C-Class (W202) platform.

In late 1999 for the 2000 model year, a facelift was launched which incorporated, among others, a revised instrument cluster with a bigger multifunction display, steering wheel with controls for the multifunction display and radio, Tiptronic automatic gearbox, revised bumpers and new side skirts. Wing mirror-mounted turn signals were implemented in 2001 for the 2002 year model.

In the United States, the CLK 430 could be equipped with a "Sport Package," which gave it the external styling of the more powerful CLK 55 AMG, and equipped it with the same wheels and tires as its AMG counterpart (see section "CLK 55 AMG"). This allowed it to reach up to 0.83G's of lateral acceleration, and 66.5 mph on the slalom run.

Since the CLK 55 AMG Cabriolet didn't officially release until 2002. In 2001 the CLK 430 Cabriolet could be equipped with all the AMG options as a special order from the AMG factory with the full 55 AMG setup, which includes the CLK 55 AMG engine and transmission, AMG suspension, AMG brakes and full set up as a factory option. Making it the first 2001 CLK 55 AMG Cabriolet. Although only a very few were built.[2] 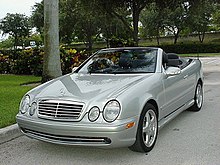 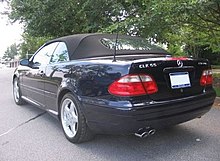 The five-speed automatic transmission (722.6) is adapted from the gearbox used in the V-12 S-class models, because that gearbox can take the torque. It is fully adaptive and electronically controlled, and is a stronger unit than that of the CLK 430. Also a larger four-bolt driveshaft that's four inches in diameter connects to a reinforced rear differential to keep all the extra power under control. Standard traction control keeps wheelspin to a minimum, while its Electronic Stability Program (ESP) keeps the CLK on its intended path.

The standard CLK chassis is used, and while the current version is not based on the new C-Class platform, the AMG version of the CLK offers some special undercarriage components. The four-wheel independent suspension is basically the same as the lesser CLK versions, but AMG fits higher-rated springs, tighter shock valving, larger diameter anti-roll bars and stiffer suspension bushings. The resulting firmer, more controlled ride is made even tighter by its high-performance ZR-rated low-profile tires. The brakes have been enhanced as well. The huge four-wheel discs are larger and thicker than the other CLKs, and the rear discs are specially vented to enhance cooling. An anti-lock braking system (ABS) is standard, while Brake Assist applies full braking force in panic stop faster than a driver could. It rides on AMG Monoblock alloy wheels, 7.5" front and 8.5" rear, shod with 225/45ZR17 and 245/40ZR17 Michelin Pilot Sport tires.

The Mercedes-Benz CLK-GTR was a V12mid-engine race car developed for the 1997 FIA GT Championship. It shared only the instrumentation, front grille and the four headlamps with the normal CLK C208. Production of the required 25 road cars began in winter of 1998 and finished in the summer of 1999.

The C207/A207 E-Class was introduced as part of the new fourth-generation E-Class lineup, and was first shown at the 2009 Geneva Motor Show.[8] It is based on the W204 C-Class platform,[9] but shares 60% of its parts with the E-Class sedan and wagon.[10] In 2013, the C207/A207 received a facelift, featuring updated design changes and performance and fuel economy improvements.[11]

The following are the sales figures in Europe and in the United States:[12][13]

Be Smart, Check in Advance. CARFAX — Your Vehicle History.

Sometimes what you don't know can't hurt you, but that's not the case when buying a used car. As an independent vehicle history provider, at CARFAX we've made it our mission to tell you everything you need to know by uncovering as many events as possible from the previous life of a used car. Our primary goal is to help you get to know your next car from the inside out before deciding to make an investment that will be part of you and your family's everyday life. We believe your next car shouldn't be hiding anything from you.

CARFAX Vehicle History Reports contain over 28 billion historical records from 20 European countries, the US and Canada, which are updated daily with new information.

Even if you live in a country we don't collect vehicle data from, it's still always worth checking the Vehicle Identification Number without obligation. The used car import and export market is booming and many owners would be surprised to find out exactly what happened to their vehicle during its previous life abroad.

Let's be clear: Although we strive to find every detail of a vehicle's life so far, we are focused only on the vehicle's history, and do not collect any information on previous owners. The information we provide relates solely to the vehicle, its odometer reading, any accidents that have been covered up, where the vehicle comes from and much more — it never gets personal. We've uncovered irreparable damage several times in the past, but other times our vehicle history checks draw a blank — and sometimes that's actually a good thing.

Did you know that considerably more used cars are sold than new cars? We think this second-hand system is nothing short of fantastic. However, it goes without saying that it gives rise to different methods and tactics: Some sellers will disguise a car that's been in an accident under a fresh coat of paint, tamper with the odometer or conceal theft. This is one of the less appealing aspects of buying second hand. Our goal is to establish trusting relationships between buyers and sellers, since this is the best way to help customers make the right decision. Your new car should be reliable and make you feel safe, as well as make you feel like you haven't paid too much.

But more than anything else, we don't want you or your family unknowingly sitting behind the wheel of a vehicle that isn't 100% safe. This is why we strive to take these vehicles off the road, which not only makes the used car market safer but our streets safer too.

CARFAX was founded in the US in 1984 and expanded into Europe in 2007. Around 100 team members spread across six European offices process vehicle information from 22 countries.

Fostering strategic partnerships with registration authorities, law enforcement agencies, government departments, insurance companies, inspection centers and numerous other leading companies around the world has enabled us to compile a unique international database for vehicle histories. We use this database to help make the used car market more transparent. We give everyone in the process of buying a used car access to what is currently the world's most comprehensive source for vehicle history reports, and is growing day by day.

We remain neutral and independent despite our partnerships — our sole purpose is help customers make an informed choice and ensure their safety and the safety of their family. This includes never collecting any personal details — we do not accept any PII from data sources amongst the information we provide about a vehicle. We ensure that data protection laws are observed at all times. Furthermore, we always collect our data in compliance with legal and regulatory frameworks — in all the countries in which we are active. We expressly distance ourselves from illegal activities such as data theft, scraping and hacking.

We get it. Ads can be annoying. But ads are also how we keep the garage doors open and the lights on here at Autoblog - and keep our stories free for you and for everyone. And free is good, right? If you'd be so kind as to allow our site, we promise to keep bringing you great content. Thanks for that. And thanks for reading Autoblog.

Here's how to disable adblocking on our site.

You still haven't turned off your adblocker or allowed our site. It only takes a few seconds.

You must be logged in to perform that action.

Yevsey came up and loomed over Nyurka. He grabbed her palms, took her off her shoulders, spread his arms to the sides, exposing then he grabbed her, slid down along the. Body and, grabbing the pelvis with his hands, lifted her to the height of his height. Now her head was at his level. He pressed his lips to hers and began kissing these ripe cherries with pleasure.

And now, when the situation has changed, she no longer resisted, and even took the initiative herself (which had never happened before). poses and actions, and gradually acquired the necessary experience, which, in turn, awakened in her the skills of obtaining voluptuous pleasures. These innovations had an effect, I became more often and, with great ardor, participate in sexual pleasures with my wife.

During my student days, I got used to preparing myself more or less decent dinners. It came in handy. The noise of the water in the shower stopped and after a couple of minutes I heard his steps behind my back. Interestingly, these were not bare feet. - I'm ready.

Bts imagines he protects you

D1s bulb near me